“Secrecy” as practiced by the US government, particularly but not exclusively the Intelligence Community, is the basis of many public concerns. If a concerted, rigorous and and expedited (over the current pace) effort were made I believe it would dissipate most but not all public concerns. It should include an individual’s being able to request an expeditious review of their records that no longer require classification. 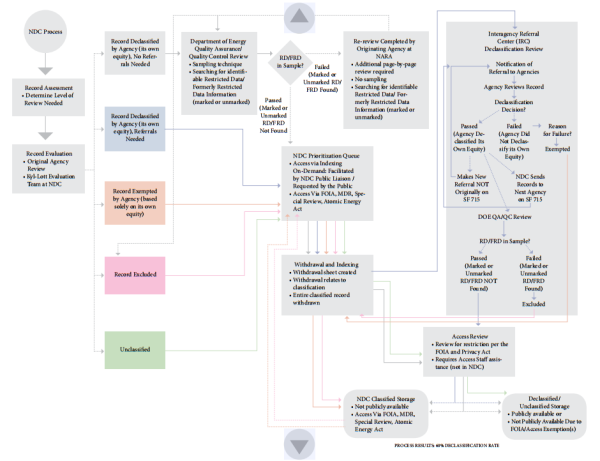 The current process for 25-year automatic declassification review, found in the PIDB’s December 2014 Report – and a prime example of why the NDC is not yet living up to its potential.

A version of this article originally appeared in The Federalist.

The National Declassification Center (NDC), governed by the National Archives and Records Administration (NARA), has the potential to become President Obama’s largest, longest-lasting, and most important transparency initiative. The NDC has made important strides over the past six years, but important steps remain to ensure that the Center actually fulfills its mission to “release all we can, and protect what we must.”

According to the most recently available public figures, the NDC has “successfully” reviewed 352 million pages of classified records since 2010. Of these, 222 million pages have completed the NDC’s declassification review but have not completed NARA’s boxing and processing procedures—and possibly another Department of…